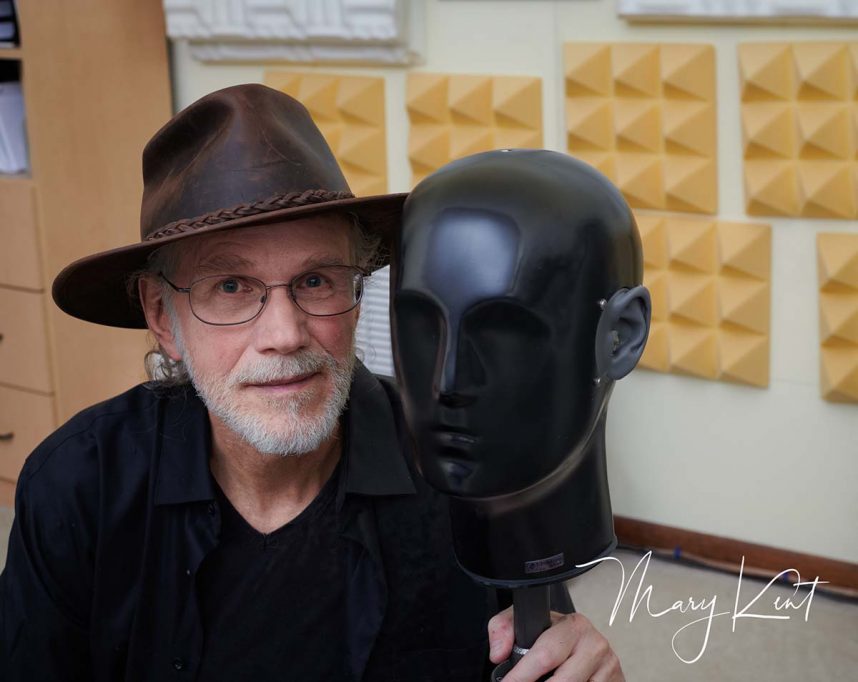 The Effect of Hats on Frequency Response

I’ve always been concerned about the sonic effect of hats. The reflections from the brim cause comb filtering and create irregular frequency response. If you’re a mixing or mastering engineer, a hat can affect your judgment for EQ and instrument balance, or just give you a strange feeling about the sound quality. Sometimes an attending client who’s very sensitive about hair loss comes in wearing a baseball cap and I recommend that they turn the hat around so that the brim faces the back. But does moving the brim to the back really improve the sound they hear? What about the delayed sound which comes around the back of the head and reenters the ear with a delay, affected by the reflections of the hat brim? How much does this affect the fidelity? Inquiring minds want to know! In this blog, I settle the hat question for good.

Recently I installed a pair of extremely high quality DPA 4060 miniature mikes inside a dummy head for making superior binaural recordings and doing some research. So he’s not a dummy any more: Presenting Bobby Goldenears: 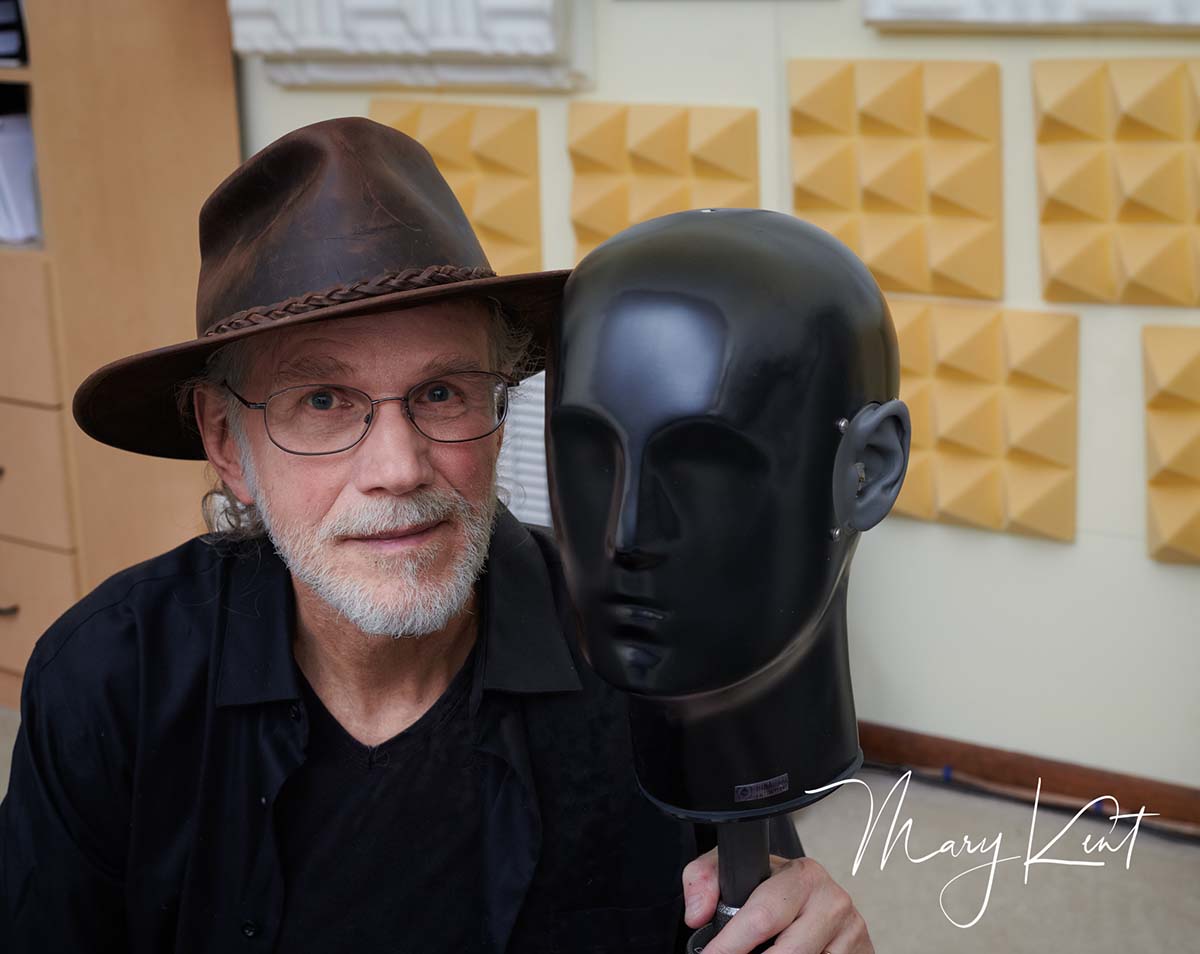 This dummy head can be purchased without microphones from https://binauralenthusiast.com/. I purchased a specially matched pair of DPA 4060 from the wonderful Len Moskowitz at https://www.core-sound.com.

For my measurements, I positioned Bobby Goldenears at exactly (and I mean exactly) the listening position in front of my calibrated loudspeakers, which have phase and impulse correction. I centered and rotated the head until the time delay of the signal from the left speaker to the left ear exactly matched that of the right speaker to the right ear. I also matched the time delays of the crosstalk from the opposite speaker. In other words, I adjusted the position of the head until the delay of the signal from the right speaker into the left ear matched that of the left speaker into the right ear. That means that the head is perfectly centered and facing forward. By the way, this is not an easy feat: it requires a lot of very small physical adjustments. I accomplished this to a precision of 1 sample at 192 kHz sampling, which is 5.2 microseconds. Both pairs of corresponding delays match within 1 sample. Based on the speed of sound in air being 0.346 mm per microsecond, the maximum error of head position is 1.799 mm! Less than 2 mm potential error in head position is good enough precision for me.

Now that Bobby’s head has been positioned, I measured the response of the speakers via his DPA 4060 transducers embedded in his artificial ears. I had to capture four signals: the two “direct” signals: Left speaker to left ear, and right speaker to right ear. And the two “crosstalk” signals: right speaker to left ear, left speaker to right ear. Because in stereo reproduction from spaced loudspeakers our hearing system integrates the direct signal and the crosstalk signal. I then summed the direct and the later-arriving crosstalk signal in the time domain. This becomes the reference frequency response.

Next I placed a hat on Bobby and performed the measurements with a hat. Then I performed difference calculations — comparing the frequency response without a hat to that with a hat. So if the hat has no effect, the displayed frequency response will be 0 dB across the board, perfectly flat. All the responses displayed below are measurements of the left ear including the time-delayed crosstalk, and they all have 1/6 octave smoothing.

The first hat I measured is a cool leather hat I bought in Buenos Aires. 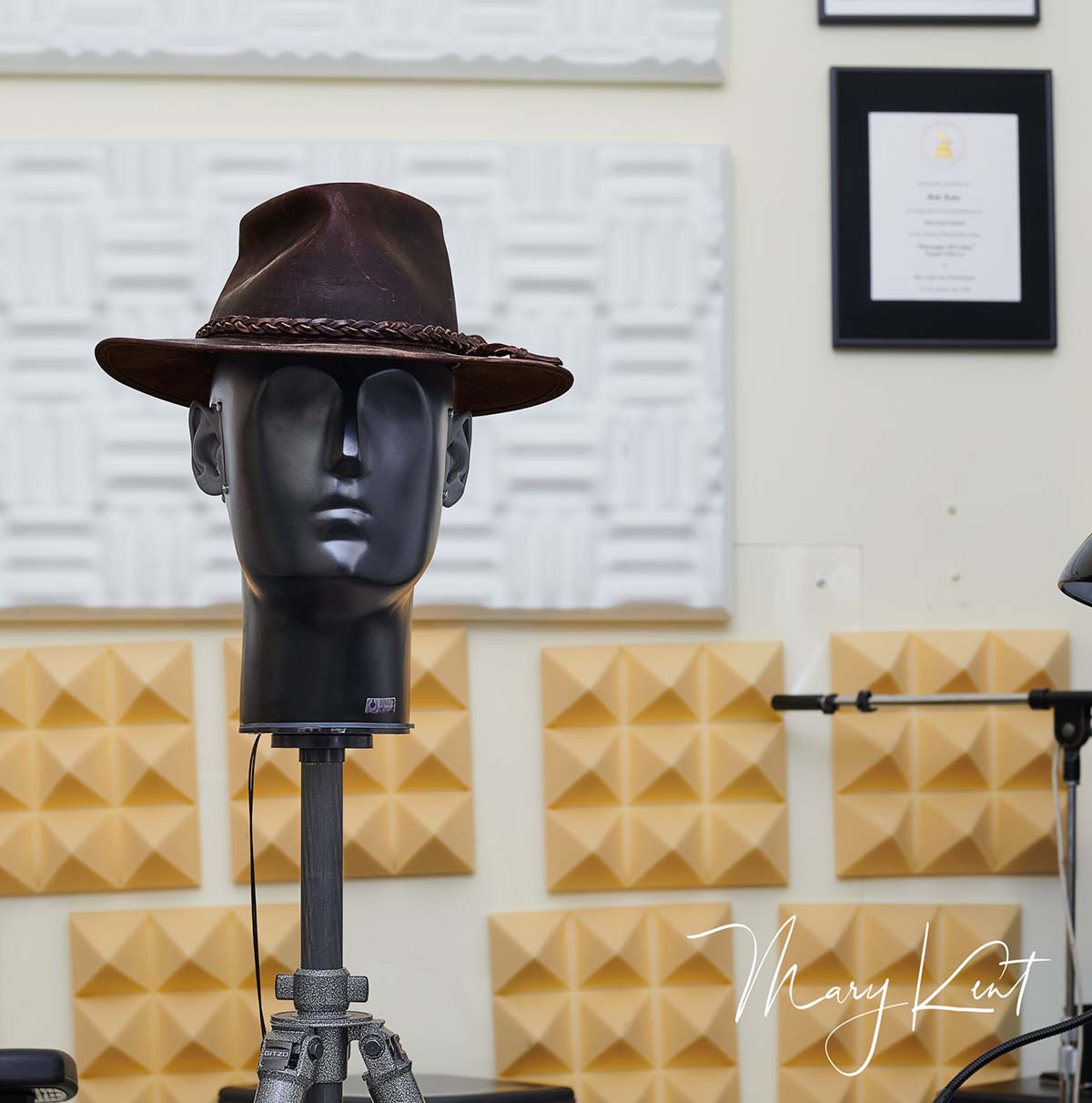 This is the frequency response that Indiana Jones gets to hear:

As you might expect, Indiana’s hat has quite a large and irregular effect. I definitely would not recommend making critical sound judgments wearing this hat.

But what about a baseball cap? You’d think it would be innocuous. 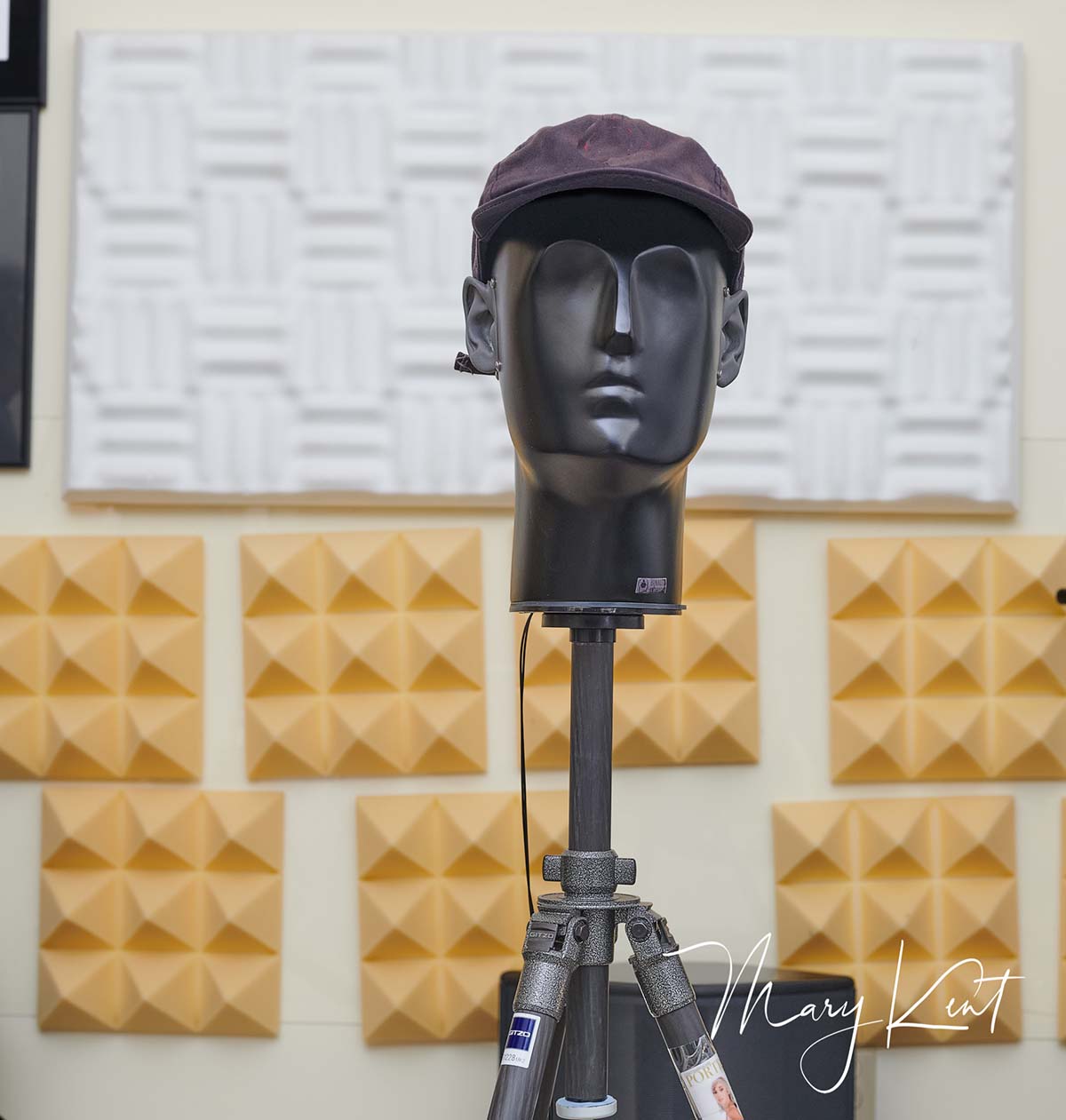 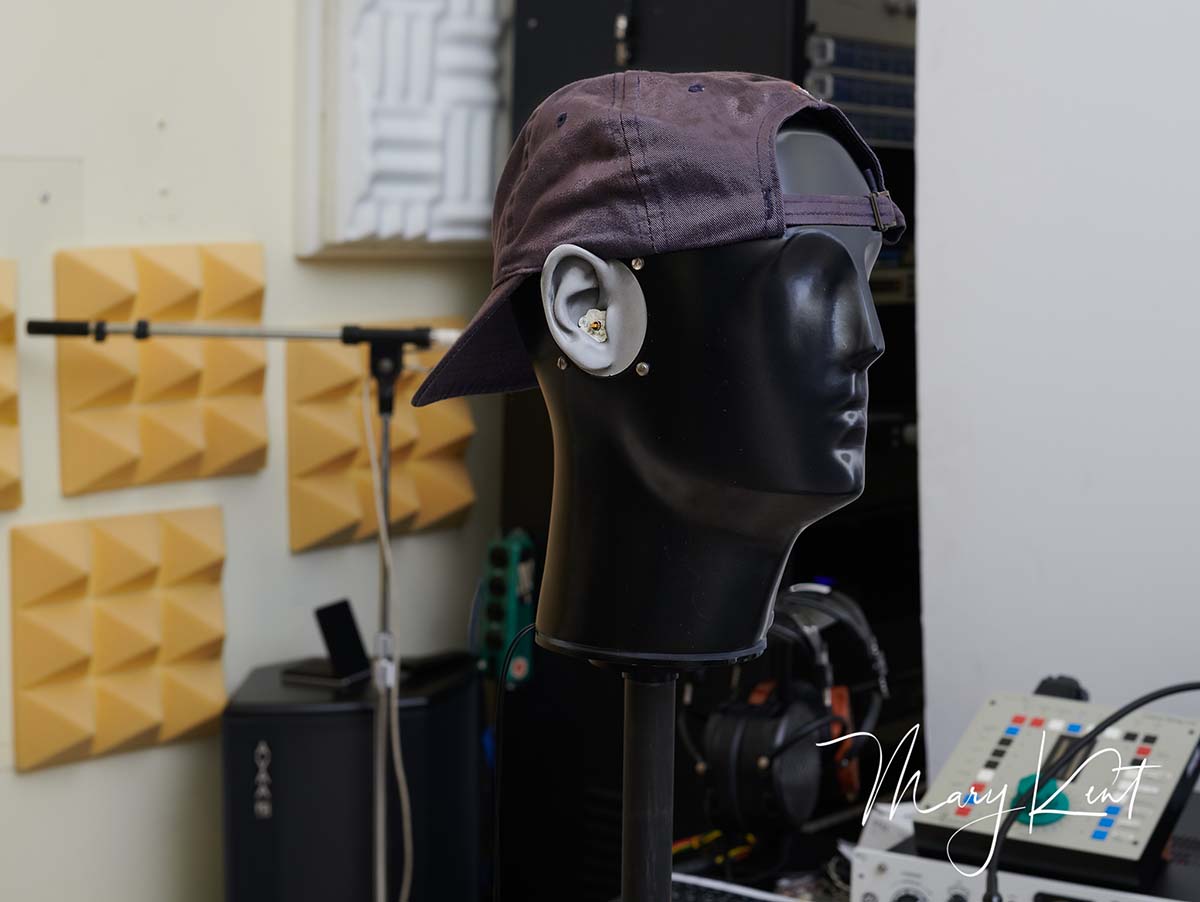 As it turns out, not so inaudible, folks. Here’s a comparison of the frequency response of the baseball cap with the brim facing front (red trace) versus facing back (blue trace):

The surprising thing we discover is that both positions of the hat brim produce meaningful changes in frequency response! So I’ve been wrong all these years; I’ll never again recommend that my visitors turn their hat around. Instead, I’ll ask them to please take it off. The important thing is to include the crosstalk signal in your calculations: When you include the crosstalk signal, the reflections from the hat brim are even more significant, and meaningful even when the brim of the hat is pointing backwards! Most of the egregious effects are in the upper midrange and high end. I cannot explain why a hat would have any effect around 35 Hz or 170 Hz, but both hat positions exhibit an identical effect at those frequencies. Puzzling. I doubt this is due to an error in measurement as the two measurements are contiguous all the way up to around 500 Hz. The front brim position does measure slightly worse, with a dip of almost 1 dB around 4000 Hz, which probably represents considerable interaction of the hat brim with the shape of the ear’s pinna. The front brim position shows a sharp peak around 7 kHz, probably a high frequency reflection from the forehead to the brim, while the rear position shows a milder shaped dip at the same frequency, perhaps because of cancellation due to the delay from the rear reflection into the left ear. The front brim position shows a broad 0.7 dB peak around 15 kHz, again likely due to a reflection off the brim — fairly insignificant... unless you are a critical mastering engineer who likes to wear baseball caps.

As a last tickle, let’s compare the effect of the Indiana hat versus the front-facing baseball cap. Red trace is the baseball cap, Blue is Indiana Jones:

There is no clear loser, or winner! The only real loser is the audio engineer wearing any of these hats, in any fashion. Hats all folks!